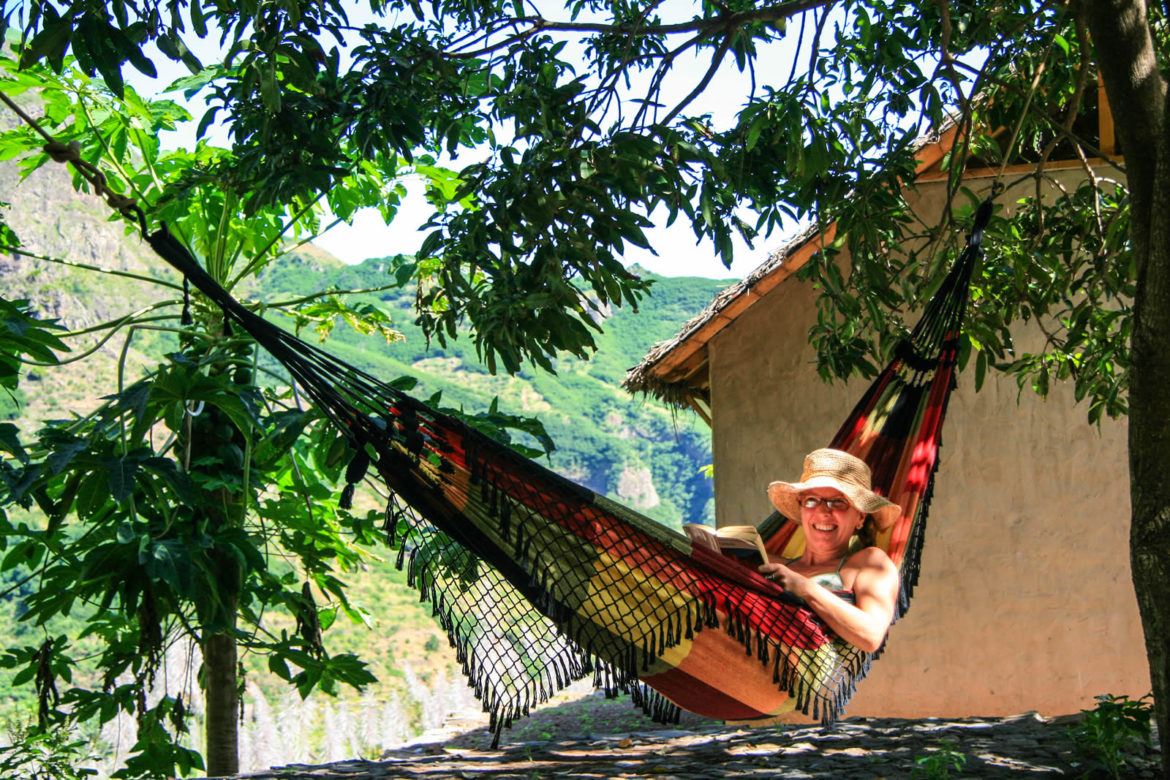 Aldeia Manga awaits you with a garden spread out over 7,000 m², featuring bananas, guavas, papaya, mangos, bamboo and all manners of flowers and other plants.

There are shady spots with tables and chairs below the large mango trees, inviting you to linger and relax after your hiking adventures. There’s also a hammock for those who prefer to sway in the breeze. The hooks and hammocks are stowed in each bungalow. These are a wonderful way to while away the hot summer days, since there’s always a slight breeze under the trees.

Sunbathing fans can make themselves comfortable on the large, natural grass lawns. There are plenty of options for sitting or lounging, a favourite pastime during the cooler winter months in particular.

Guests with a rental car can bring their vehicle to the upper part of the grounds on a private car park. 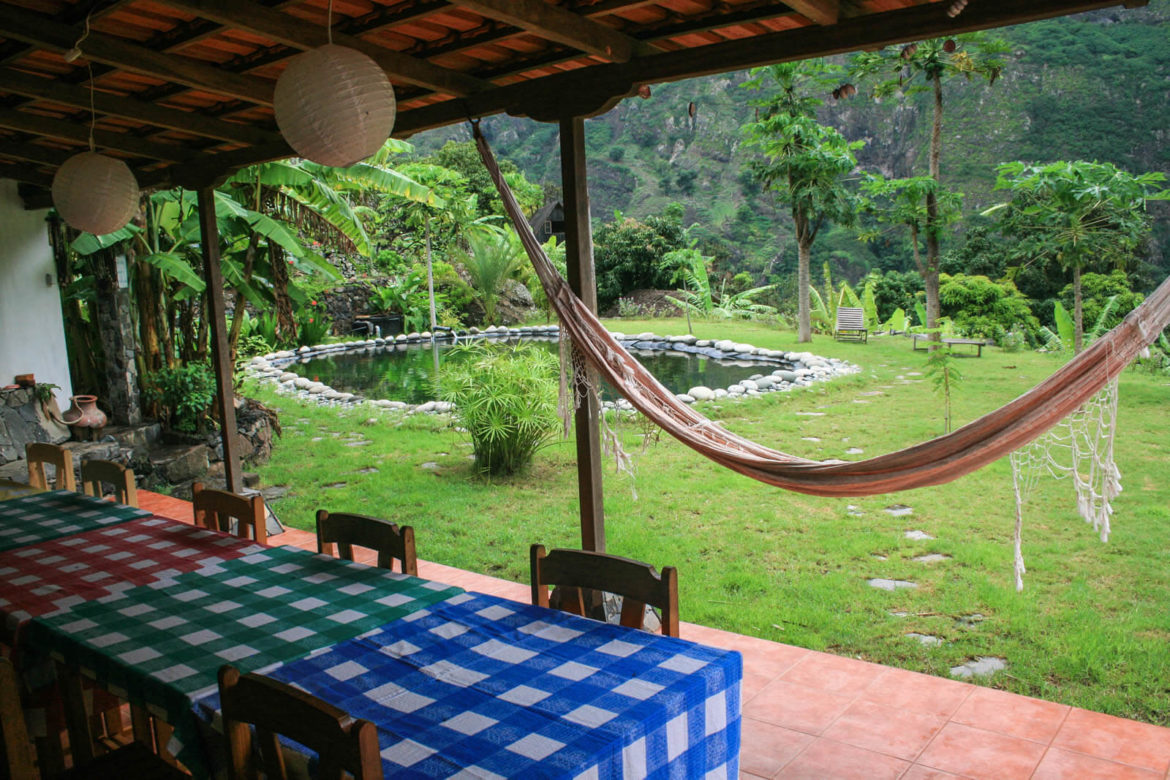 Our guests are treated to culinary treats while at Aldeia Manga. Our covered terrace, designed in the style of the Canary Islands, features a grill and is the site of breakfast and dinner. Up to 18 persons can be served here.

The grill can be fired up from noon to the afternoon. We can also arrange for fresh fish; simply request it one day in advance.

Soft drinks are kept in a large refrigerator. Those so inclined can try wines from the Cape Verde Islands, as well as rum and liquors produced in the Paúl Valley.
Other typical products from the region, such as baskets woven from banana tree bark and hats, can be viewed in a display case and are available for purchase.

From this cosy spot you can also check your emails, surf the internet or make a Skype call. We offer free WIFI. Due to the small bandwith, we kindly ask you to avoid software-downloads, watching videos and video conferences. 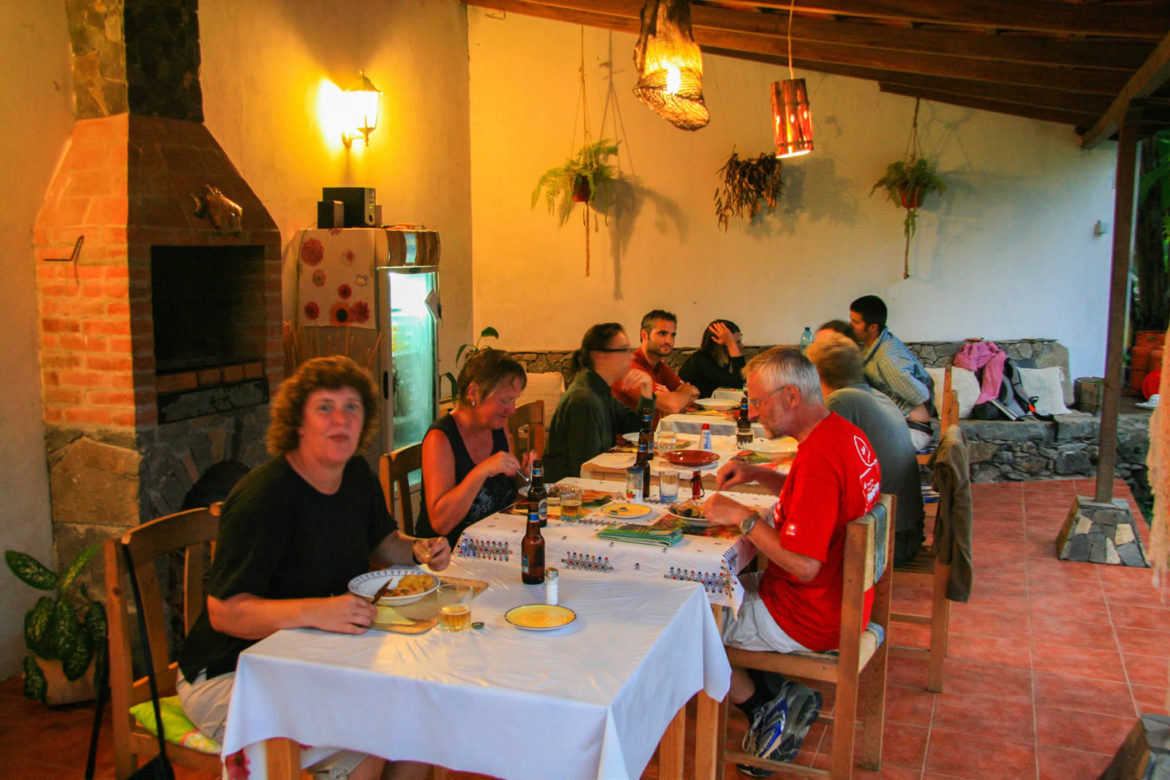 
We can’t offer you a separate restaurant at Aldeia Manga, but we can provide a bountiful breakfast, including homemade marmalades, fruits from our garden as well as bananas and papayas, accompanied by rolls, eggs, cheese and tomatoes.

We offer small and large picnic packages for guests who want to bring provisions along on their tours. Ask at the reception desk what is possible.
You can look forward to a rich buffet in the evenings, whenever possible featuring foodstuffs from our own production, the Paúl Valley and the fishers from Vila das Pombas. Our motto is: the closer the better. Ultimately we’re living here with and from nature. So our table is graced primarily by fish, grains and vegetables.

We have plenty of options for vegetarians as well, but please just let us know in advance so that we can prepare the buffet accordingly. 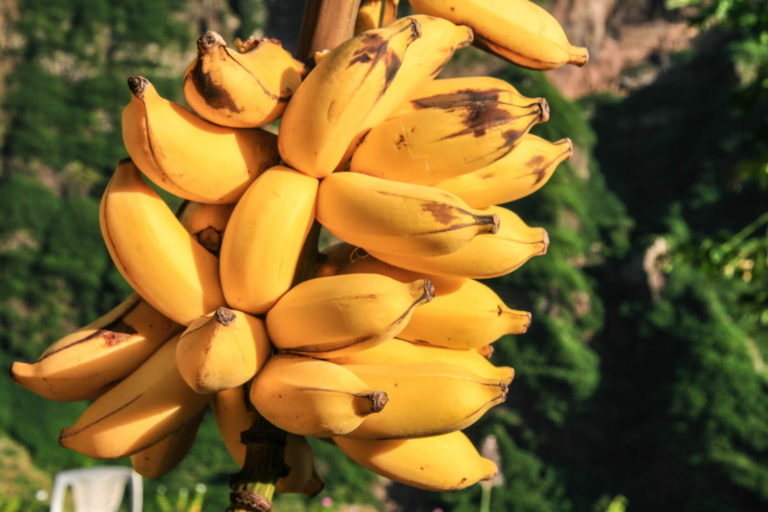 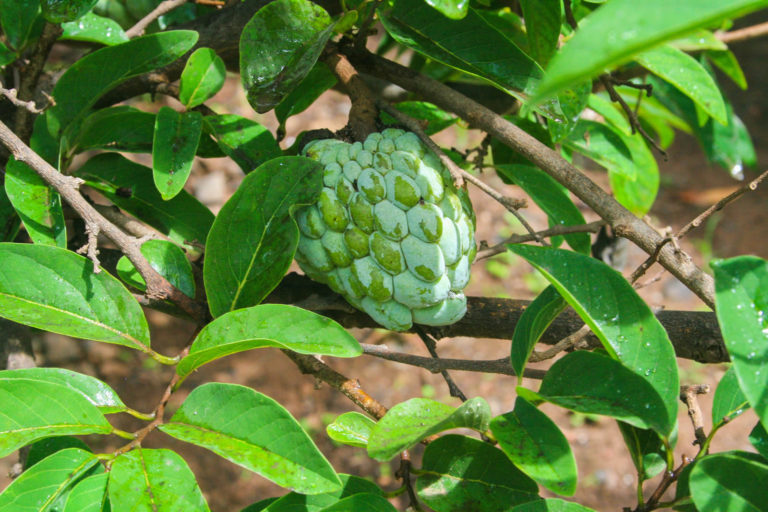 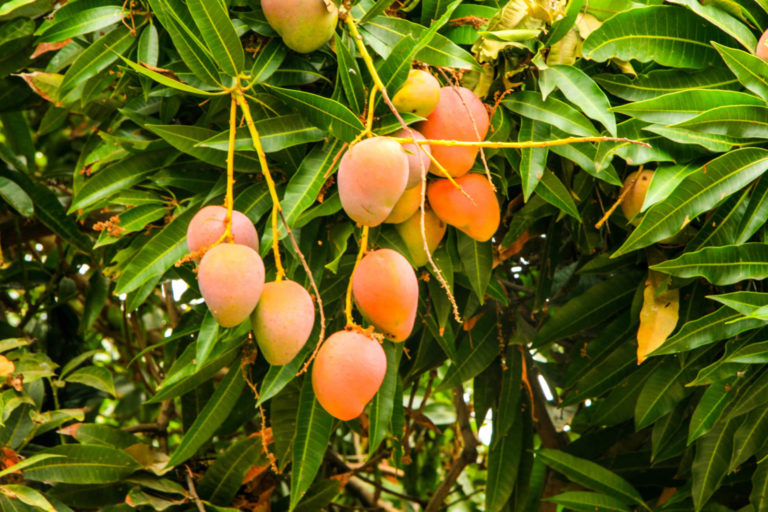 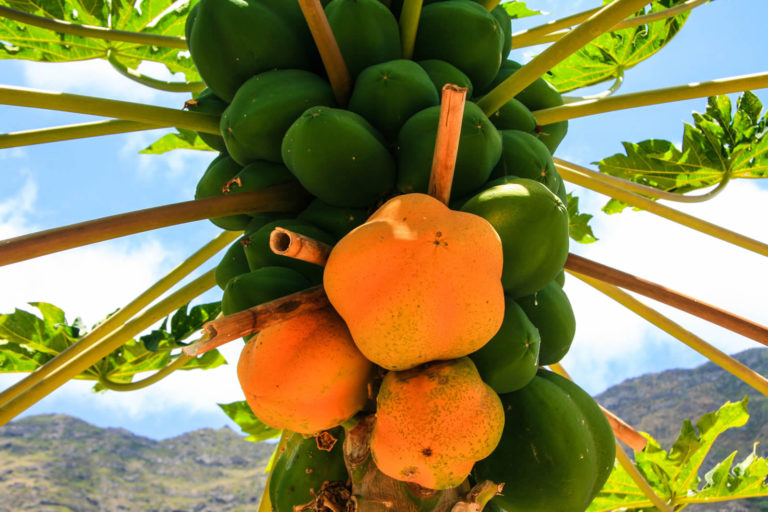 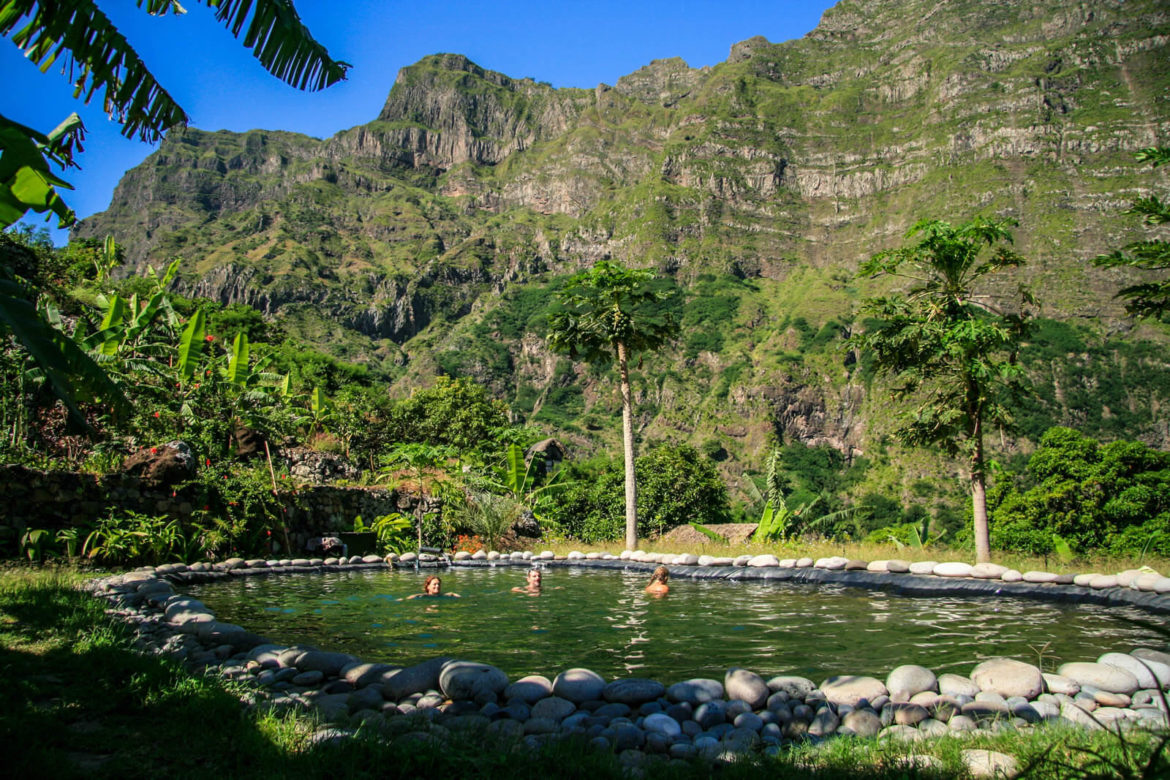 After an extended hike or a longer stroll, there are few things better than a dunk in our swimming pond. It was cleared by hand, has a surface of aprox. 100 m²  (15 meters long, 7.5 meters wide) and up to 2.5 meters deep. A non-toxic rubber foil serves as the bottom liner.

Our water preparation process is conducted entirely without chemicals. We instead purify the water naturally using UV-C light and a sponge filter. The immersion pump does have to run around the clock, but is inaudible. This technique allows us to use the valuable moisture for watering plants.

Algae on the side walls, small fishes and the occasional frog who finds our pond a lovely place to abide only add to the atmosphere. The water is nearly crystal clear and invites guests to come relax. An underwater bench provides a handy place to sit and read while having a soak, although there’s plenty of enjoyment to be had from simply looking out at the mountains and ocean. The pond is also big enough to allow for a few laps. There’s a staircase to make it easier to get in and out of the water, although the algae can make it a bit slippery. Please remember to be cautious. We’ve got something for those who enjoy an outdoor shower as well: we’ve installed an outdoor shower directly next to the pond. 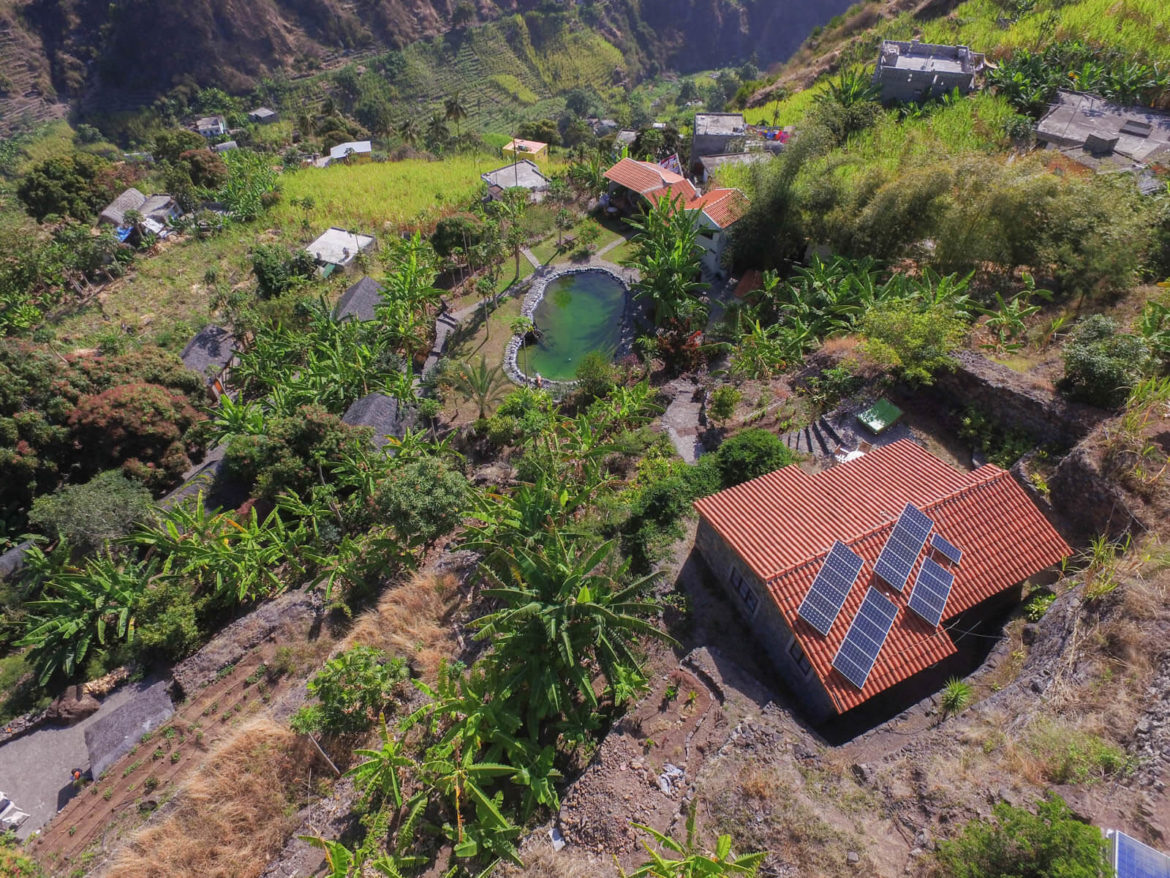 
We in Aldeia Manga make a concerted effort to use primarily natural resources. This naturally also applies to our energy supply. 60 percent of our power needs are met through solar energy. This ensures that our stores of foodstuffs will remain safely cool and unspoilt even in the event of a power loss.

We have solar cells on several places of the lodge with a total power of 5kW.
An intelligent inverter selects automatically between our energy sources. If the solar energy isn’t enough to meet our needs, then the system draws from the public power grid. If all two options fail, then our battery bank offers sufficient reserves. The batteries also work overnight, consuming any surplus generated energy from the day without drawing off the emergency reserves. 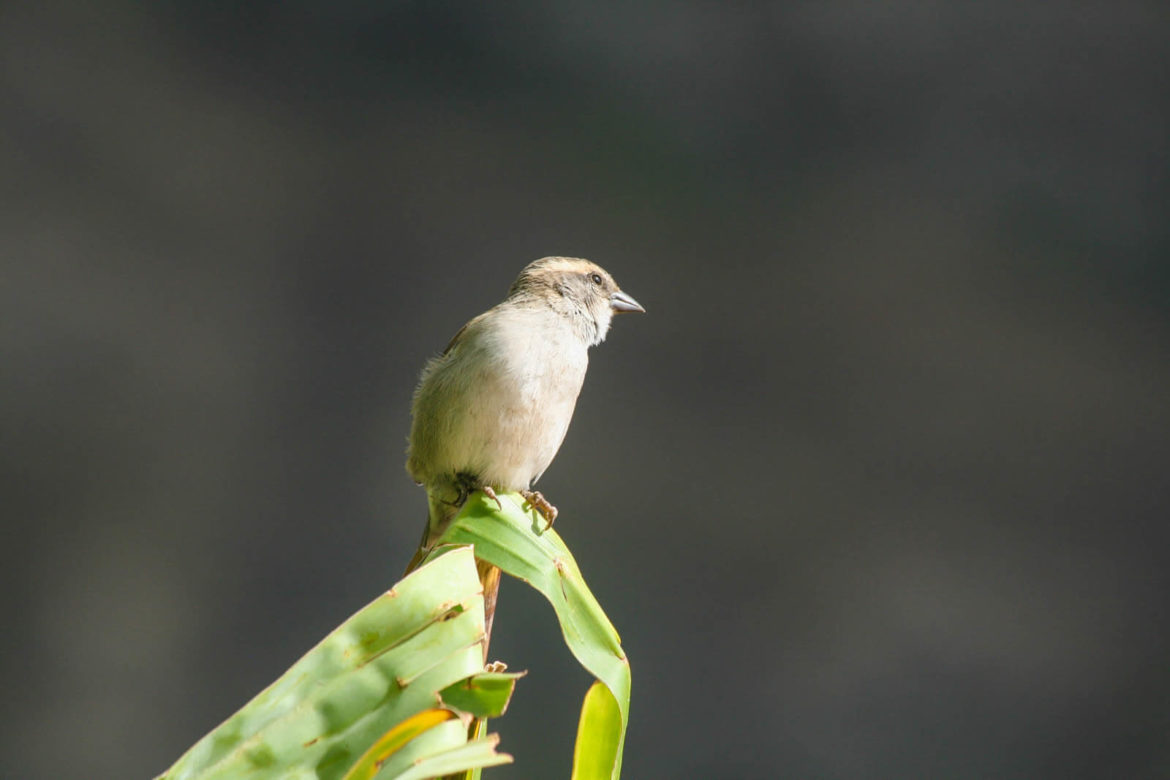 
We at Aldeia Manga are living in the middle of nature. A tremendous variety of plants grow here. There are also insects and spiders — the Paúl Valley alone is home to 160 species of spider.

Some of the animals also occasionally find their way into the bungalows and houses. This is an inescapable part of living amid unspoilt nature. But there’s no need for fear: none of the ants, spiders or geckos are a threat to people. They’re actually beneficial, since they eat flies and mosquitoes.

Since there are actually few mosquitoes here, and those primarily during the rainy season, we have consciously decided to forgo mosquito netting on the houses. Anyone who reacts strongly to mosquito bites should be sure to bring along natural insect protection cremes or oils for trips during the rainy period (August – October).

The one bug to be avoided is the large centipede — the ‘bite’ of the centipede is quite painful, similar to a bee sting. You’re unlikely to encounter a centipede here though, and even if you do, just keep calm. These animal only attack in self-defence. They’re much more likely to just run away if they encounter humans.